Geraldine graduated from Cardiff Dental School in 2000 and worked in private practice in Cheltenham. She pursued training in Oral and Maxillofacial surgery in Plymouth General Hospital from 2001-2002. Geraldine became a Member of the Faculty of Dentistry (MFDS) at the Royal College of Surgeons of Ireland in 2004. She trained with Professor Harris in Blackrock completing the diploma in Implantology in 2008. Geraldine completed the highly regarded Diploma in Clinical Dentistry in the School of Dentistry in TCD in 2009. Geraldine took over Stillorgan Dental Care in 2009. Since then the practice has gone from strength to strength. Recently, Geraldine completed the Diploma in Primary Dental Care with The Royal College of Surgeons in Dublin (2014). 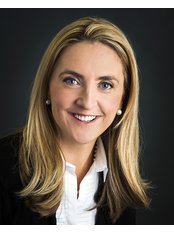 Custom Made in 2017 Dental Marketing International